When you put on the Roger 1973 winter jacket, you’re wearing the future of sportswear. We use cutting-edge technology to design and produce the world’s finest and most comfortable cycling winter jacket.

On the inside, the jacket is soft and warm to ensure excellent thermal protection, while on the outside, it’s water repellent with a windproof membrane to guarantee you the best protection from the cold weather. Furthermore, the Roger 1973 winter jacket is also highly breathable, helping you to keep performing at your highest level at all time.

For safety reasons, we have also included long and stylish reflex tape to ensure maximum visibility when you’re out on the roads.

The Story behind the name

An early crash on stage 11 in the 1973 Giro d’Italia allowed a strong group of pre-race favorites to get away. Top names like Eddy Merckx, Felice Gimondi, Gianni Motta and Roger De Vlaeminck were all represented at the front, while a young Giovanni Battaglin was caught at the back and had to concede three minutes that day.

In the final sprint for the victory, De Vlaeminck once again proved to the quickest as he powered past Gimondi and Merckx to cross the finishing line first in Benevento. De Vlaeminck later went on to win no less than 22 stages in the history of Giro d’Italia.

The Roger 1973 winter jacket is a dedication to the Belgian legend who won so much in Italy during his career. 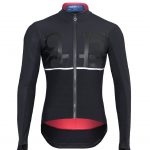