Like our summer jerseys, the Pompei 1974 winter jersey, too, is the future of sportswear.

By only using the best materials available, we have created this revolutionary jersey with Tiger Shield Air fabrics from Windtex making it both insulating and highly breathable at the same time. Its slim fit design means the jersey will feel like it’s part of your body and as it behaves like an extremely soft diving suit, it offers great water resistance together with the water repellant zippers.

The Pompei 1974 winter jersey is made for you to keep performing at your best level even in cold conditions. For safety reasons, we have also included long and stylish reflex tape to ensure maximum visibility when you’re out on the roads.

The Story behind the name

The 1974 Giro d’Italia was memorable in many ways. Especially the third stage of the race from Pompei to Sorrento.

Despite its distance of just 132 km, this medium mountain stage turned into a living hell for the majority of the riders. The ascents of Agerola and the infamous Monte Faito caused no less than 78 riders to miss the time cut – including the leading rider. However, all riders were reinstated the following day, as only 22 would have remained in the race if not.

The Pompei 1974 winter jersey is a dedication to the riders who fought their way to the finishing line on this grueling day in the saddle. 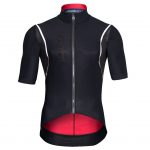